Why Are You Opposing Free Internet for Poor People?

For first time in history of India, few Telecom companies have become benevolent towards the consumers in India. Yes, the telecom companies have decided not to charge the user for the data consumed over the net. Rather, these companies are going to charge web applications and services for the data, that I as a user should pay for. Is this really happening? For all we know, one of the company has already launched a ZERO plan, where you can do online shopping, social media networking, chatting free of cost without paying a single penny for data. Perfect! No more paying any data charges. More savings! Government finally delivering the promised FREE INTERNET for the poor man. Somebody said “There’s no free lunch.” But, we are lucky to have free Internet.

While I was contemplating how lovely would be life without any data charges, things suddenly got haywire. The news is that “Me getting free internet is going to destroy THE Internet”. They even came up with a slogan “Save the Internet”. Has the Internet being attacked? The opposition for the free internet came up with a term called “Net Neutrality”. I was clueless about this term till yesterday. However, people are saying that availability of free internet is going to affect net neutrality and this is something really big. Over 2 lakh people have emailed the Telephone Regulatory of India to not allow free internet to be provided to consumers.

The protest was so much that one of the online shopping application site, who agreed to pay charges of data usage on my behalf to the telecom companies, has withdrawn support from the ZERO plan. I guess people starting uninstalling their application as a form of protest against the Free Internet. Even after the online shopping site clarified that they support net neutrality, people have not installed back their app. I wonder the online shopping site would have got better response if that had launched a million dollar sale rather than backing out from free internet.

I mean how come consumers getting free Internet going to affect Internet so much that its going to imbalance the Internet. Last night, I saw a debate on a prominent channel where I understood more about the topic. The “Against Free Internet” side debated that Free Internet for few applications/ services (chosen by Telecom Companies) is going to bias the consumer away from the services/ apps (which can be accessed through normal paid internet).

The “For Free Internet” side debated that they are going to offer free Internet to poor people who are anyways not having any access to the Internet at all. This is a philanthropic act and you can’t be against philanthropy being a human. 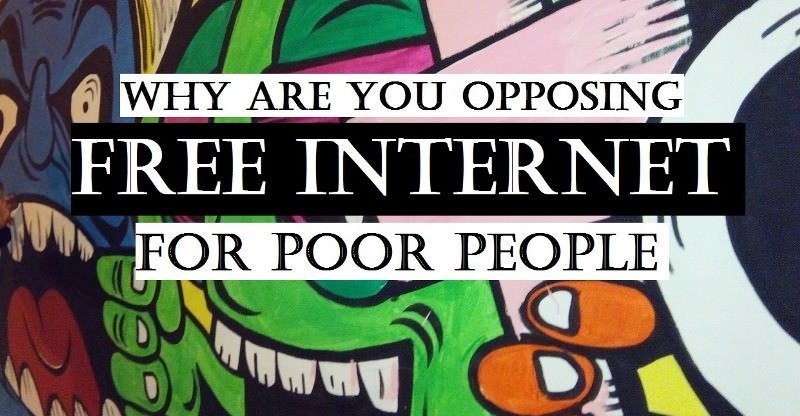 Why are you opposing Free Internet for poor people?

This made me think of the poor villagers who don’t have any access to the internet. There are so many workers in city who still write letters to their families back in village. Things could have been easier with a free email application. I know one Taxi driver who waited for six months to go back to his village to see his new born son. If he had free internet, he could have the picture of his son on the first day itself. People will argue that those free email/ message application will put more ads on the user interface. But those poor people are paying Rs 5 postage stamp to send a letter home. They don’t mind sending a free email to their home even with fifty ads. They are the underprivileged who don’t have access to the greatest invention of the century. Why are the privileged class having a problem with them joining on board.

Why are you stopping Free Internet?

The people who are protesting  are netizens, start-up owners, social media influencers who can afford the Internet in the neutral way. I request these people to ask their maids, servants, drivers, villager relatives that how much these people know of Twitter, Periscope, Start-ups, Facebook.

People who are in support of Net Neutrality are asking out “Imagine a world with no Startups”. I ask them back, “Imagine a world with free internet to every Indian, however biased that Internet is.” Imagine village people doing video conferencing, emails and message-sharing. The list of this imagination is not long. I wanted to write, “Imagine people doing online shopping”. But those poor people who could not afford “paid internet” at the first place will not shop anything online. These underprivileged people don’t have money to shop gadgets online. They don’t click on any ad on the emails or the social media networking sites. Even if they click those ads, they don’t book a hotel or flight on the referred site. This raises an important question.

Why will applications pay for free internet to poor people?

The social media and shopping application won’t pay to Telecom services for free internet to poor people. The under privileged are not their targeted customers. They are going to pay to bias the internet experience of the middle class or the privileged class. This means Telecom services are selling us a biased free internet in the garb of philanthropy. If they are really so benevolent towards providing free internet to the underprivileged, they should only provide free internet to poor people. They should not provide this benevolent service to the people who can afford paid internet. I will not oppose these companies at all if they provide a fully biased internet for free to the people below poverty line.

Helping the poor people, lessening the gap between poor and rich – These telecom companies can wrap their agenda into as many sweet words as possible. But people of India are educated enough to see through their plans. This entire thing reminds me of “Fountainhead” by Ayn Rand, wherein similar lobbyists project the ideas of collectivism to go against the main protagonist. There are so many Howard Roark today behind various blogs, start-ups, youtube channels, who are trying to give better service to the Indian consumers, who are fighting the competition against all odds. They are generating better ideas to perform better on the level playing field called Internet. We can’t accept the biasing of Internet towards the deep pocketed and established players.

I recommend you to watch this viral video for more understanding on this topic. If you support net neutrality, you can send an email to TRAI through this website.

I hope you liked this post which looked into perspective of both sides of ongoing net neutrality debate in India. I would look forward to read your views and opinions through comments. House in open.